Mizerov, an exhibition of Ostravian artists (or artists being active in Ostrava), is a reflection on current social-cultural situation related to Covid-19 epidemy. The artists will present their work of traditional media (painting, sculpture) and also work of multimedia.

I was born in Karvina. That is a town on the border with Poland. That is a place which I have perceived as the end of the world since my very early childhood, as a place I have always wanted to leave, I have always wanted to run away from. At the end of the 80‘s, an unexpected opportunity presented itself to me. To leave the Karvina and Ráj (Heaven), a district with a hospital, where I was born, and Mizerov (Township), where a cemetery is. What characteristic names!

But fate decided otherwise. Instead of emigrant future there was a velvet future for me. Something you wouldn't have imagined even in the wildest dream in the spring of 1989. There was freedom instead of a prison. Speaking of the dreams, one of my pre-revolutionary dreams took place in somewhat cinematic setting, an escape from Europe on a board of a passenger liner. From its deck, I could see the Statue of Liberty emerging from fog.

But suddenly I realized I had been deceived, because it was a panorama of Ostrava with its ironworks and a monstrous housing estate emerging from the mist instead of the iconic silhouettes. I woke up and I didn't understand ...and I tried to forget.

As time went on, I had to face that terrible nightmare again and again; I tried to understand when I spent 20 years away from Ostrava. When I returned to Ostrava, more than 10 years ago, and obviously it was less tense, personally subtle, but undoubtedly important. The last time I thought about this prophetic dream and the future, it was again on the occasion of arranging this exhibition in Cieszyn, which I am honestly looking forward to. And I would like to share this joy with my fellow visual artists. And through the joy of shared visual expression, I would like them to focus on the phenomenon of living the time together, the matter of solitude, or the end of the world.

Gosh, who would have thought that we would get that opportunity again? That you would not be able to cross the bridge because you are a European and do not live on the other side of the world, but in the very heart of the community of friends. And this is what the Mizerov exhibition is about. That all the miserable things that happened during last year cannot destroy the most valuable thing we have; the mutuality we experience and share authentically and every day. 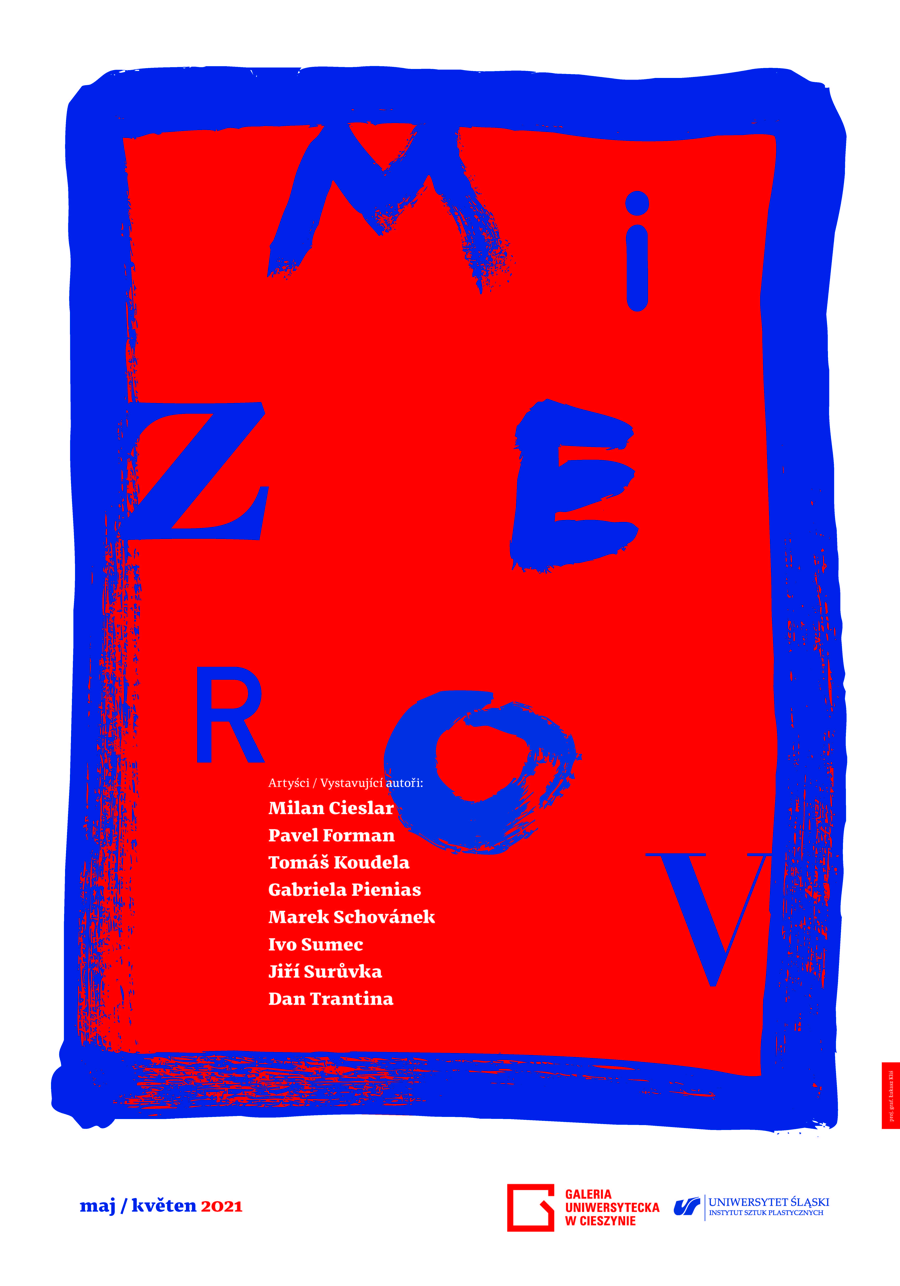 The author uses a slightly ironic register of artistic expression, which he speaks of as ‘painterly antimatter‘. This means that he works with industrial paints, sprays and printing stencils. “The paintings are created fast and in series.“ Cieslar works with both small na monumental formats. Overlapping of initial painting structures with a continuous colour areas, which can be further redone, is an indispensible and in the in the past many times proven creative method. The creative way is ideologically anchored by the principle of constant and radical change of the painting. The finished work stays a final product unless it becomes a part of a new visual concept.

Pavel Forman studied in Olomouc at Palacky University between 1997 and 2001. He attended lectures about new German literature and South Asian culture at Humboldt University since 2002. He graduated at the prestigious Universität der Künste in Berlin in 2006. He finished his PhD studies at the Faculty of Education of Palacky University, Olomouc in 2015. Now he teaches painting at the Faculty of Education of Ostrava University. Forman works and lives in Prague and Ostrava.

Diversity of shapes and sophisticated colourful aggression is characteristic for Forman's artwork. The thematic list is extensive; it includes iconic and nameless characters of Czech and European history handled as a large-format visual paraphrase of composition and gestures of multifarious sign systems, inspired by pop art and street art.

Koudela is a poet, prose writer, curator, contemporary art theorist and art autodidact. He (sometimes using the pseudonym Jan Vrak) at the turn of the 1980s and 1990s worked as an editor in the Havířov Revue, then he worked for M.U.K.L., a publishing house. In 1992, he participated in founding the Votobia publishing house in Olomouc, where he held a leading position until 2005. In his fine art work he devotes himself to visual poetry. Text becomes a visual material readjusted from original contents to new meaning contexts.

Gabriela Pienias is a visual artist and a curator. In her work, she works with large-format paintings, three-dimensional objects, sculptures, installations, and arts in public space. She is also interested in engaged and community art. Pienis also organizes conferences and art festivals related to contemporary art.

Marek Schovánek is undoubtedly a world famous artist, born in Czechoslovakia but grew up and studied in Canada. He currently travels around the world but spends most of his time in Berlin. The range of Schovánek's art work is extremely extensive, he creates paintings, sculptures and installations consisting of hundreds of individual artefacts. Schovánek's art is critical to the abuses of contemporary society.

According to Schovánek, the artist schould be a committed person who observes an reflects the negative social phenomena. Schovánek often works with humour and irony, which he lets organically grow into his artefacts. A notable feature of this work is the post-production approach. He chooses banal human objets of everyday life, which he transforms into surprising artistic artefacts that can excite the viewer out of the trance of the grey everyday routine.

He portrays ordinary things around us – tires, pets, backpack, bread, mugs and more. The aim of his detailed study is not the viewed objects, but he is interested in the shape, surface and place they occupy in space. He is also interested in the qualities that are self-evident, which we do not normally deal with, do not see and are not attractive to us. Sumec stops, immobilizes and absolutises the objects. Then he recreates them into general signs, principles of visual experience.

He studied Czech language teaching at the Philosophical Faculty of the University of Ostrava between 1984 and 1992. After graduation, he taught at the Secondary School of Applied Arts for two years. Since 1994 he has been engaged in free production. Today he works as the head of the New media studio at the Department of Intermedia at the Faculty of Arts of the University of Ostrava.

Jiří Surůvka has been one of the key figures of Czech art since 1989. His work is extremely broad, dealing with performance, photography, video and digital art production. In his performances, which have become an important impulse to the development of this artistic discipline in the Czech lands, he discusses the phenomenon of transformation of personal identity and dealing with their own flesh. An important element of Surůvka's performances was the Batman costume that enabled him to turn into a superhero trying to save the world of art while he parodied the hypocrisy and cheapness of contemporary society. Using Dadaist playfulness and humorous exaggeration he criticises war traumas and totalitarian systems.

Dan Trantina i sone of the most promitent representatives of Czech painting of the middle generation. He graduated from studio of Jiří Nacerasky's studio at the Prague Academy of Fine Arts. Trantina's paintings reside in dramatic expressive gesture on the border between abstraction and reality. Apart from the expressive approach, it is the content of his paintings which is quite important fo Trantina. He flirts with the profane and sacred world with vlasphemy and humour. Images of saints and gods with Paris Hilton wet dog are decipted in Trantina's painting world.